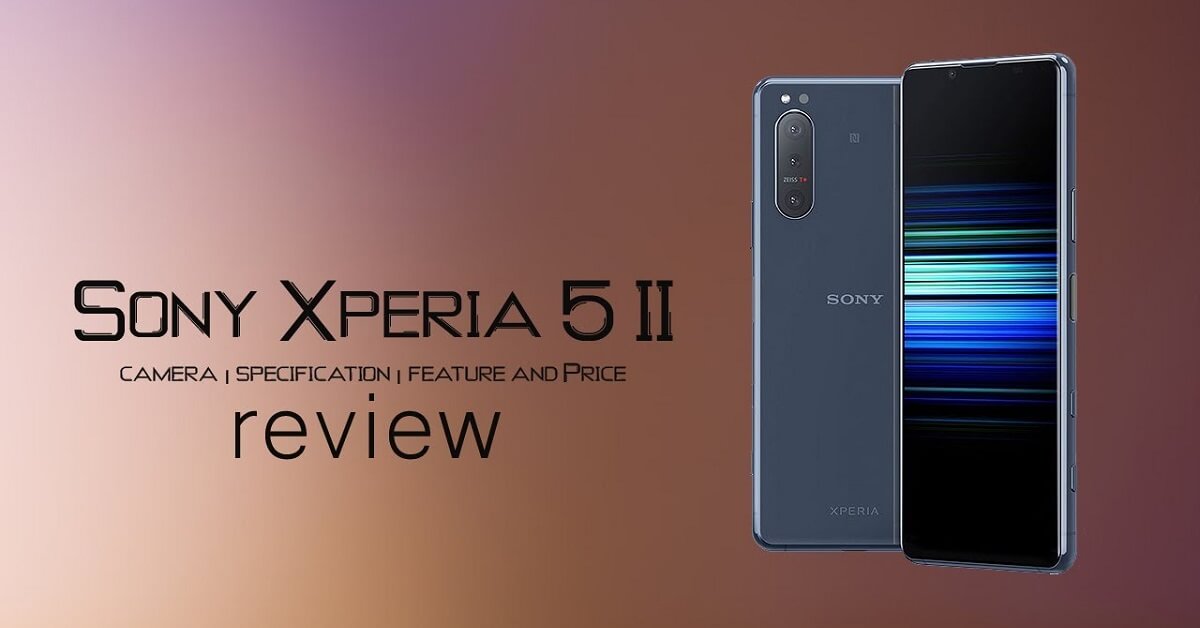 Previously, if you have liked larger mobile phones produced by Sony, and always wished for a small one. Trust us, this is the ideal choice for you. However, it does have a few cut corners.

On the other hand, the Sony Xperia 5 II has significantly improved some features of the handset. It is considered to be the first smartphone with a 120Hz refresh-rate screen.  Moreover, you can enjoy scrolling through your news feed on the big 6.1-inch screen.

This article is a complete Sony Xperia 5 II Review to help you understand whether it’s a good choice for you or not. Furthermore, we will be discussing its main features, its pros and cons, and whether you should purchase it or not.

The specifications of a product are one of the essentials that aid in decision-making. Thus, below we have given a specification table for Sony Xperia 3 so that you can take a glance at it and then make an informed decision. There is no doubt in saying that the Sony Xperia 5 II is a modern generation smartphone with top-of-the-line features. Moreover, if you want to go into details of various features, you can find it below the specification table.

Sony Xperia 5 II Review about Features: Everything you need to know

Sony smartphones are comparatively more expensive than its competitors available in the market. It would be great for you to know the complete insight of the device before you choose to buy it.

Sony launched its new Sony Xperia 5 II on October 15, 2020. It is only available in a single configuration with 8GB RAM and 128 GB storage and two basic colors – black and blue. In the United States, the main retailers of the smartphone are AT&T and T-Mobile.

Purchase this amazing smartphone on AMAZON

Moreover, Sony has used the 21:9 aspect ratio quite cleverly. The manufacturers have made sure to create a smartphone that gives a good feel in the consumer’s hand while having a larger display when compared to other competitors available in the market. Comparatively, the Xperia 5 II is narrower as well.

If you are familiar with a Sony smartphone or are a user, you can notice the edges of the smartphone. Sony has upgraded the sharp edges to more rounded corners than other devices.

Well, there was a sudden shift by the manufacturer. Square edges are known as the distinctive look of the Sony smartphone. However, Sony fans are not disappointed with the changes made and think the phone looks nicer in hand.

Apart from that, the volume button is on the right side near the top. As you move down, you will find a Google Assistant Button – that you can customize for some other functions as well.

Between the volume and Google Assistant Button, you will be able to locate an enlarged lock button that has a fingerprint sensor. Nevertheless, most phones have incorporated in-screen fingerprint sensors but Sony hasn’t done that. They have worked it out with a traditional method and according to our test, the fingerprint sensor works well.

When you are spending nearly thousands of dollars on a smartphone, you might not like the fingerprint sensor button being attached separately. Many significant companies have changed the game entirely by placing the sensor inside the screen. For example, you can look into the Samsung Galaxy S20 and the OnePlus 8 series.

Instead of using plastic for the back of the phone, Sony has created it with glass. At the back, you can see a camera block on the top-left corner.

Other than all of the amazing features, the Sony Xperia 3 is also water-resistant with an IP65/68 certification.

Sony has been known for its display quality and the producers made sure to include the Full HD PLUS (1080 x 2520) display in the Xperia 5 II. However, this smartphone doesn’t have a 6.5-inch screen and a 4K display but has a 120Hz refresh rate.

This means the screen gives you an impeccable experience while you scroll through your news feed on social media applications or while you play your favorite games. The whole vibe becomes smooth and fast; however, you cannot understand it until you try it on your own.

Vibrant colors are part of the screen. According to our research, the screen looks phenomenal with high peak brightness – you would certainly enjoy your favorite movie on an HD screen. You might be thinking about the QHD display Sony used to offer. Nevertheless, it seems a great trade-off for the Full HD PLUS after you pay the price for this gadget.

The Xperia 5 II has adopted three rear cameras and a single front-facing camera from the Sony Xperia 1 II. Do you know what it means? The Sony Xperia 5 II has great quality and a powerful camera when compared to other smartphones. Moreover, for people who wish to play around with the camera settings and don’t want to click pictures with automatic functions, it is considered ideal for them.

The three rear cameras are all 12MP: an ultra-wide camera accompanied by a 16mm lens, the main shooter with a 24mm lens, and a telephoto shooter with a 70mm lens. According to our test, we detected that all the cameras are exquisite in both; low and efficient light. However, everyone might not be able to handle the Sony Xperia 5 II camera and that is the reason why they may not like it.

Sony has been incredible with its cameras over the years and this is the reason they emphasize so much on it. The Xperia 5 II camera enables you to play with its settings. For example, you can manage the ISO, color balance, and more according to your desired result. Moreover, people who are not that technically strong can always opt for the automatic option. The Sony Xperia 5 II did great in our test with the automatic settings.

A Qualcomm Snapdragon 865 chipset has been installed in the Sony Xperia 5 II. Well, you might not consider it as the best chipset currently available in the market but it delivers sufficient performance and power to carry out any task on your phone. The Xperia 5 II comes with a single configuration: 8GB RAM and 128GB internal storage.

We carried out a test to check the performance with some heavy applications and games. The Xperia 5 II is incredible with speed and smoothness. Every game and application loads quickly without any lag. The speed is much better than other smartphones available.

Sometimes, we play games and watch videos for long hours without any realization. During this time, smartphones start to heat up but that problem is not applicable with the Sony Xperia 5 II. The feature of Heat Suppression Power Control is included in the hardware to keep the smartphone protected from heat.

Moreover, remember you are not stuck with the 128 GB storage as you can simply increase it by adding a microSD card.

What are the PROS and CONS of Sony Xperia 5 II?

Sometimes, we spend money unnecessarily on products without knowing them entirely. Any factor clicks our brain and we are all set to purchase it. Before you do that, it would be great if you understand the product’s benefits and drawbacks.

What are the likes and dislikes of the Sony Xperia 5 II?

Sony has been crucial while developing this smartphone for its target market. However, the label was appreciated and criticized for the new device at the same time.

These are some of the things that consumers loved and hated about the device;

Moving forward, not every smartphone is for everyone. You should focus on your needs before you buy one. Below, the table would aid you in deciding whether you should buy this phone or you shouldn’t.

There is no doubt in saying that individuals see smartphones from an investment point of view. Moreover, if you are purchasing an expensive one like the Sony Xperia 5 II, you should be

aware of all its positive and negative aspects.

The Sony Xperia 5 II has generated mixed reviews. Some people are loving the phone and some are completely against it. The users, who are in favor, are motivated due to the camera and the strong processor. Moreover, people who wish to multitask were also in favor of the device.

On the other hand, masses have been demotivated due to the price tag attached to the phone. It would not be wrong to say that Samsung has captured the vast Android market. While keeping it higher than the price of Samsung phones, Sony Xperia 5 II had to face strong criticism. Furthermore, people have complained about Bluetooth connectivity. They find it hard to keep the phone connected to their other Bluetooth devices.

When we see the Sony Xperia 5 II from a wide perspective, it is a good smartphone overall. Whether we discuss the performance or the camera, Sony Xperia 5 II is dominating the market. However, the price tag might provoke you to search for other alternatives.

Let’s hope this Sony Xperia 5 II Review helps you understand whether this phone is a good choice for you or not.