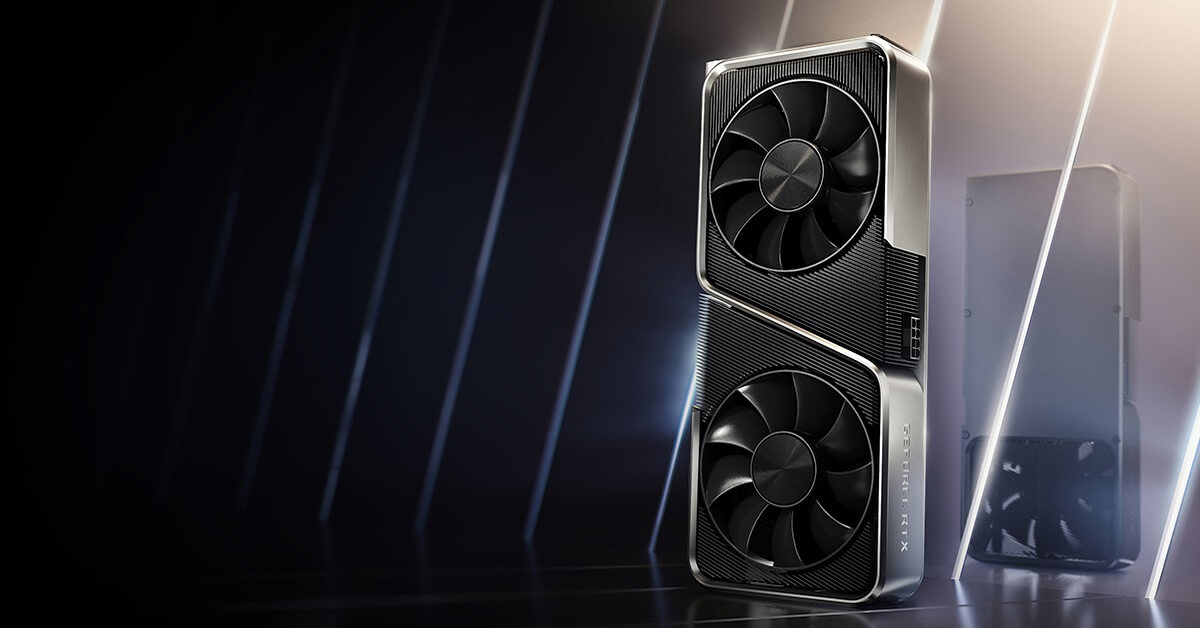 In October 2020 Nvidia announced the arrival of their new graphics card, Nvidia GeForce RTX 3070. It is one of the best graphics cards available on the market. It is on par with the RTX 2080 Ti in half the cost, truly bringing the 4K gaming experience to the mainstream for the very first time. If you want to play some of the most demanding games, or edit pictures and videos, you need a good graphics card. In most of the latest laptops, a good graphics card is already installed, however, users may upgrade their laptops to enjoy a flawless gaming experience.

Why was RTX 3070 launched delayed?

Previously, when RTX 3080 and 3090 were launched, the demand was so high that it went short in the market nearly after six-weeks post-launch. Seeing this kind of progress, Nvidia RTX 3070, which was set to go live in mid-October was delayed for two weeks. Until September 2020, the RTX 2080 Ti was the premium and the fastest graphics card available in the market with a price tag of $1000. Besides, Nvidia decided to take the competition head-on and launched a graphics card in a $500 price range. Is it even possible? Let’s find out how the RTX 3070 delivers the promised performance Nvidia is claiming.

Things you must know about Nvidia GeForce RTX 3070 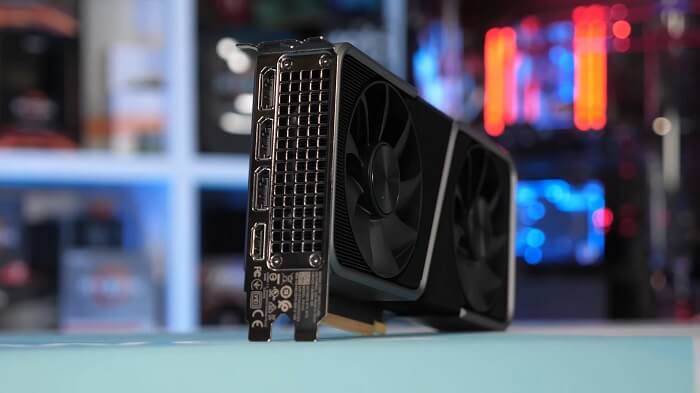 Six years after the launch of GeForce GTX 970, RTX 3070 was launched and it has taken the market by storm. Back in 2014, GeForce GTX 970 allowed its users to enjoy the experience of playing their favorite games at the maximum settings at 1080p resolution. Similarly, the RTX 3070 provides its users with an opportunity to play highly demanding games in 4K resolution. The GTX 970 produced an impeccable performance with both the GPU-intensive games, The Witcher 3 and Batman: Arkham Knight. The main aspect that users consider before buying a graphics card is the cost. GeForce GTX 970 was priced at $329, whereas, RTX 3070 comes with a price tag of $500. It is important to note that Nvidia has adopted the same strategy to penetrate the market, as was the case in 2014. One of the main competitors of RTX 3070 is RX 2080 Ti. It comes with a price tag of $1099. If you have extra bucks, you can opt for it. However, it might not deliver the same standard performance, but the RTX 3070’s combination of best price and lethal processor makes it the perfect choice for you. We will provide you a brief account of RTX 3070 hardware, its performance, and why it is in high demand as compared to its competitors.
Shop at Amazon

Moreover, a market survey concluded that the kind of performance you would get while using RTX 3070 in this price range is not only affordable but also the best. 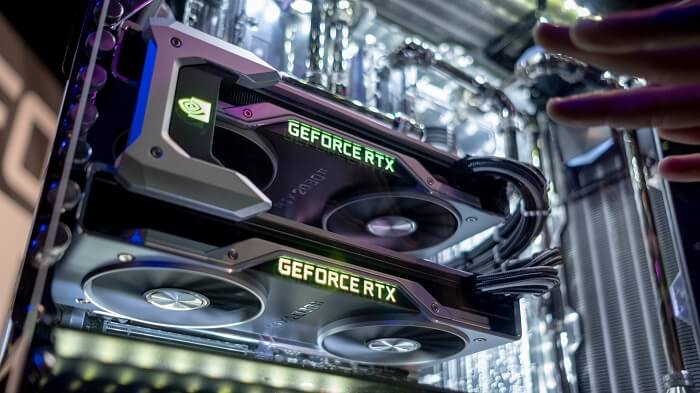 Despite having a smaller chip as compared to its competitors, Nvidia GeForce GTX 3070 comes with a whole lot of features at a very reasonable price. It doesn’t matter whether you’re using it to play heavy PC games, or have to attend endless video calls, Nvidia GeForce RTX 3070 will prove its worth.

This device is powered by the Ampere GA104 GPU. This GPU contains 46 streaming multiprocessors and 5,888 CUDA cores, just like the RTX 3080 and RTX 3090. And there is a massive improvement, both in terms of power efficiency and performance, matched only by the very best graphics cards available in the market. While RTX 3070 boosts SM count by 27% only, it more than doubles the CUDA core count that massively boosts raw rasterization performance.

The Nvidia GeForce RTX 3070 comes with a single HDMI 2.1 port and three DisplayPort 1.4a ports. RTX 3070 didn’t include the port of USB-C as found in the RTX 2080. In the RTX 3070, Nvidia has included an 8-pin power connector with an adaptor. However, we would suggest you buy a 12-pin power connector from the manufacturer instead of using the adapter that comes with the package.

As far as 3000 series graphic cards are concerned, the power requirements have certainly increased as compared to the 2000 series. The RTX 3070 needs a power supply of 220-watts which is 19 percent more as compared to RTX 2070, but less than the RTX 2080 graphics card. 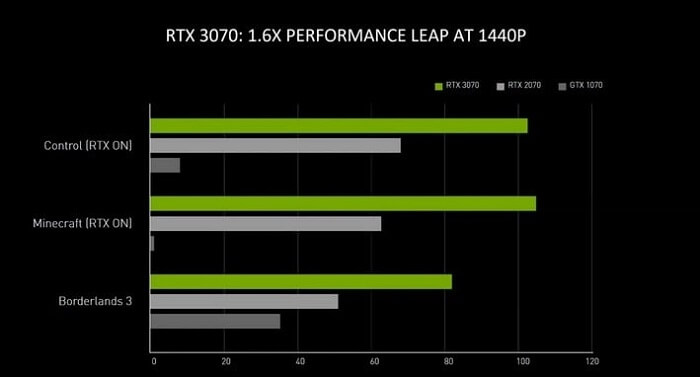 If you want to enjoy the luxury of a 144Hz 1080p display, you can do so with the RT3070 without even lowering the resolution. The most impressive part about this awesome piece of hardware is that when the 3DMark TimeSpy Extreme test was conducted on the Nvidia GeForce RTX 3070, it scored 6,990 points as compared to GTX 2080 Ti that scored 6986 points. So, a graphics card that consumes less power, with 3GB less VRAM is more efficient.

RTX 3070 also offers a good value for money. When it comes to playing Grand Theft Auto V, Nvidia GeForce GTX 3070 scored 96 fps, which was greater than RTX 2080 Ti that scored 86 fps. The difference of 10% wasn’t too much but it does reflect Nvidia GeForce RTX 3070’s worth.

With the graphics card being 25-30% slower than its elder sibling RTX 3080, there is no other difference that can prove that the RTX 3080 is a better option than the Nvidia GeForce RTX 3070. It provides a jaw-dropping 4K performance with very negligible damage to your account balance.

We can say that Nvidia GeForce GTX 3070 is one of the best graphics cards available in the market. 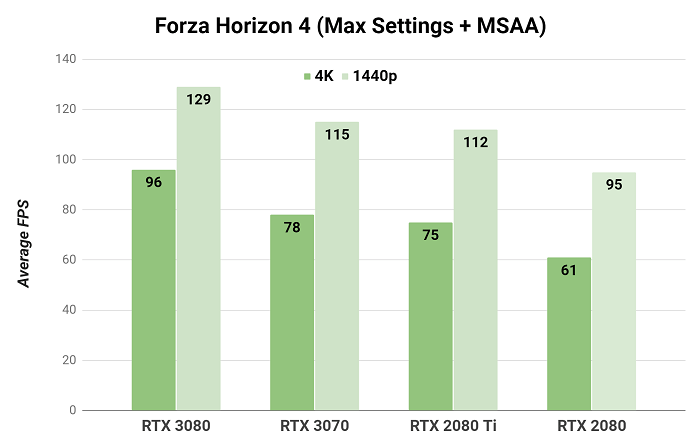 The majority of the pro gamers like to play games at 1080p resolution but that doesn’t matter if you are using Nvidia GeForce GTX 3070, you can get a gaming frame rate in three figures. A variety of games were tested on the RT3070 to check whether they lag or perform smoothly on this graphic card. The AAA games include Fortnight, Call of Duty: Warzone, Death Stranding, Control, and Metro Exodus. All of these games were tested at a 1440p display, and they hit 100 fps above. Call of Duty: Warzone went on to hit 130fps which can only be achieved if the graphical settings are set on a lower scale. However, the Nvidia GeForce RTX 3070 proved its worth again and was able to handle such a heavy game at a 1440p display with ease. 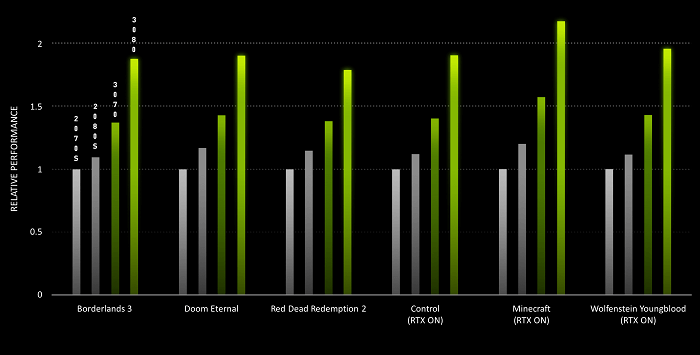 The 4K gaming benchmark results are slightly in the favor of the GTX 2080 Ti as the RT3070 needs to run more games at the medium-to-high settings to attain a noticeable 4K performance when games hit more than 60fps. However, the overall picture of 4K performance in RTX 3070 is somewhat contradicting, as in a few of the games Nvidia GeForce RTX 3070 has outperformed its competitors. For example, if we see the statistics of Metro Exodus, it produced a range of 73 fps (low) – 140 fps (high), with both of the values greater than 60 fps. 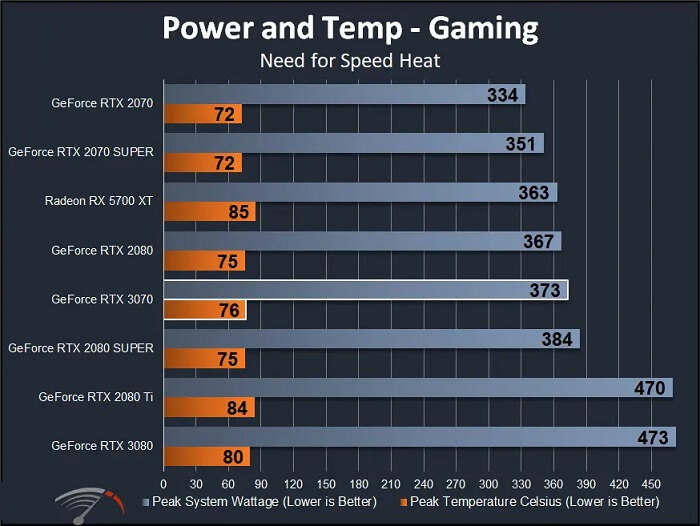 If you compare the Nvidia GeForce GTX 3070 with the previous 3000 series, it wouldn’t be wrong to say that it consumes less power than other graphics cards. RTX 3070 comes with a 220-watt power supply to run it efficiently. As mentioned above, Nvidia GeForce RTX 3070 comes with a built-in power adapter that might seem to be insufficient for the right power supply, as an 8-pin adaptor is considered perfect for 150 watts. Moreover, when the noise capacity of the RTX 3070 was checked, it cleared the test. When Metro Exodus was played for more than 15 minutes, the RTX 3070 FE noise levels were around 46.8 dB. Other than this, the fans did an impeccable job by cooling the system down with very little noise. Power use sometimes differs depending on the capacity of the game. Metro Exodus took less than the full capacity of the graphics card, i.e., 220-watts. However, when FURMARK was run on the same card, it took around 224 watts.