Apple’s MacBook air has always been about quality. With a unique selling point of being the lightest, thinnest, and cheapest Apple laptop, the new MacBook Air has a double powered battery and the overall power of the machine is equal to a workstation.

Apple’s new MacBook Air is one of a kind. Ever wondered why? Well, for starters, it has its very own Apple’s manufactured processor called the M1. That is the sole reason why the MacBook has taken a huge jump in regards to battery timing and performance. 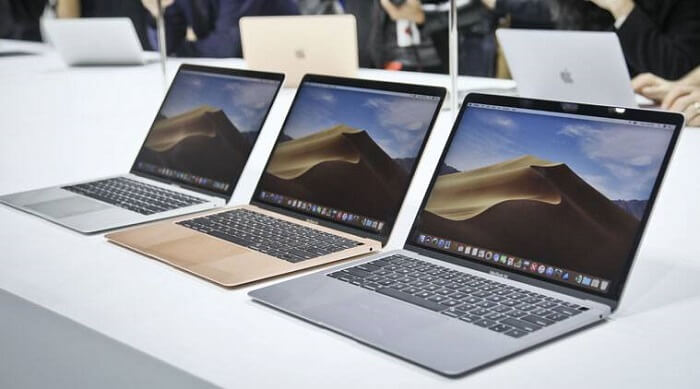 Talking about the price, the MacBook Air with the M1 processor inside will cost you about $1000. This is known as Apple’s beginner-level laptop. If you go a little bit up, the MacBook Pro with the M1 chip is here with a price tag of $1,299. These laptops are the first generations that do not have the standard Intel x86 processor.

The exterior, however, is more or less the same as before. If you place both laptops side by side (one with the M1, the other one without the M1), you will easily notice that there is nothing different between the two. The weight, size, overall dimensions, even the number of ports, speakers, and mics is the same.

Moreover, Apple’s new keyboard, the outclass trackpad and the Touch ID fingerprint button is also the same as it was in the last version.

The DCI-P3 color space is easily supported through the 13.3-inch screen. Sadly, Apple has not done much about the front webcam of the laptop. The webcam is more or less the same as before, which in our opinion is poor in comparison to the rivals available in the market.

To sum it all up, Apple’s MacBook air is very close to being a perfect laptop. There are just some aspects that are pulling its legs and keeping it below the top position.

Firstly, the MacBook Air comes with only 2 C-Type USB Thunderbolt ports. This means that you will need an additional dock extension if you want to keep your one port free, or else both ports are going to be busy accommodating the monitor and power cables. 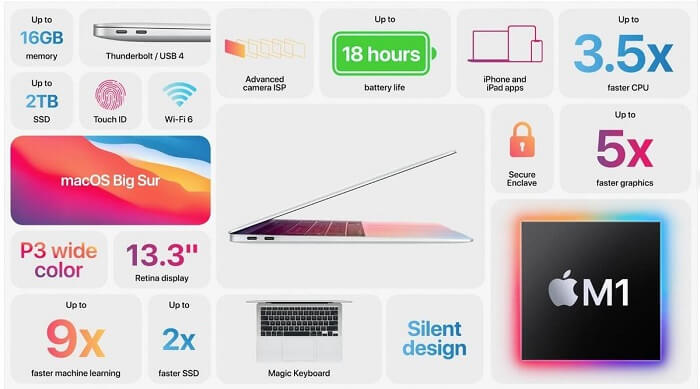 If you take a sneak peek inside the new MacBook Air, you will be surprised to see that nothing has changed, except the new M1 processor. In simpler words, the new MacBook has a different system on a chip. The M1 processor has replaced the previously used intel processor (i3, i5, i7). If you go ahead and buy yourself the cheapest MacBook, it will come equipped with an 8 core processor along with a 7 core GPU card. Moreover, you will be getting 8GB of RAM and a storage capacity of 256GB. Yes, an option to have an 8 core graphics card processor will still be there, hence, if you need to upgrade your graphics quality, you most certainly can!

The one thing that we loved about the M1 processor is that it’s simply powered efficiently. It has a total of 8 cores, out of which 4 are used for facilitating light tasks like photo editing or crunching of data. The other 4 are used for heavy-duty tasks like sending emails. These 8 CPU cores can all work together to give out maximum performance, but the M1 processor is designed in a way that only gives a maximum output when needed.

All the tech geeks know that the CPU chips are more energy efficient when they are produced on a smaller scale. Most of the chipsets are produced at a 14mm or a 10mm scale while the M1 processor chip is produced on a 5mm scale.

This claim makes M1 the fastest laptop chip. Fastest and power-efficient. What else do you want?

All in all, with the power of this M1 chip, Apple’s cheapest laptop can now facilitate you to an extent where only high-performance expensive laptops do. For instance, the 4K editing of multiple video streams is now possible with the MacBook Air.

Are the Universal Apps, Intel, and the Arm Apps Supported?

It is truly interesting how the wedge shape of the MacBook still looks so sleek and special, just the way it did back in 2008.

The developers are currently updating their apps to the new universal format. Because of the M1 chip’s arrival, now, there are going to be 3 types of Mac programs. Initially Apple’s apps run on the newer PCs. Apple’s Rosetta 2 translation system helps the Intel apps to run smoothly and the universal apps come loaded with both; Apple and Intel versions. Now, the universal apps can smoothly run on any Mac whether it is new or old.

The Rosetta 2 will show you its magic when you start any intel app. You will notice a little launch time while attempting to run any intel app. Also, you are certainly not getting away with everything. Some apps are still unusable with the M1 processor. For example, you cannot run Google’s Drive File Stream file-syncing app on your MacBook (M1).

Is it Sustainable Enough?

The all-new MacBook M1 is manufactured by using a hundred percent recycled Aluminum. It feels rigid and solid like the rest of the models. Apart from being made with 100% recycled aluminum, the logic board of the MacBook is made from 100% recycled tin. About 35% of recycled plastic is also used in some units of the laptop.

More interestingly, the energy used for the final assembling of the laptop is renewable. Go green Apple.

If your laptop is not able to sustain the accidental damages, don’t worry a bit because it’s repairable too. Apple took the iFixit’s repairability rating too seriously!

The battery of the new MacBook is unpredictable as of right now because no official statements have been made by Apple in regards to the battery. Besides, if your MacBook’s battery gets messed up, you can get it changed for around 129 bucks from the nearest Apple store.

What About the macOS 11 Big Sur? 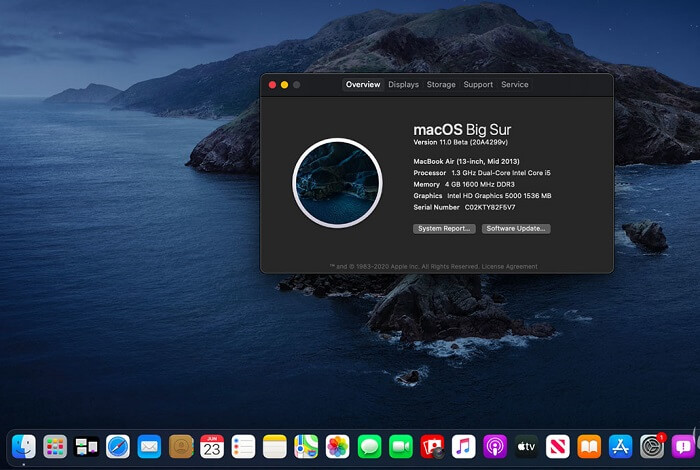 The operating system runs the same as it did with the MacBook having an intel core inside. With Rosetta 2 being present, you can easily run your iPhone and iPad apps on your laptop.

If your favorite mobile app’s developer has allowed the app to run on the M1 chipset you can happily use it on the new MacBook, after installing it from the Mac App Store.

As of right now, most of the apps found on the mac app store are broken. There is a very little amount of apps that work properly. All the other apps are either full of annoying bugs or have been left abandoned by the developers. Hence, use Mac or browser-based alternative applications for now.

Firstly, the touch ID works perfectly fine in the new M1 MacBook. But, we feel that it would be such a cool thing to have a speedy Face ID unlocking option just like the one in the iPhone 12 and the iPad pro. The M1 processor has taken Apple so far ahead of its rivals that as of now, there is a lot of time left till they catch up. The MacBook’s ability to get instantly powered on as soon as you press the button is just so soothing and satisfying, it is just like the cellphones and tablets. Moreover, if you leave your laptop on standby for 16 whole hours, the amount of battery consumed will be only 6%.

The tech geeks out there might know about an old saying that:

The MacBook Air with the legendary M1 chip has changed the game for rival companies. It can easily perform with a capacity that comes next to a working station, with a battery that lasts twice as much as the other rival laptops.

All in all, the laptop is amazingly super-fast, the looks are cool, the battery life is extremely long, the machine is fan-less and has a spectacular screen, the keyboard feels good, the touch ID is fast and very responsive, and the microphone and speaker’s quality is acceptable too. Moreover, the fact that Apple is making these laptops with recycled materials plays a huge role too!