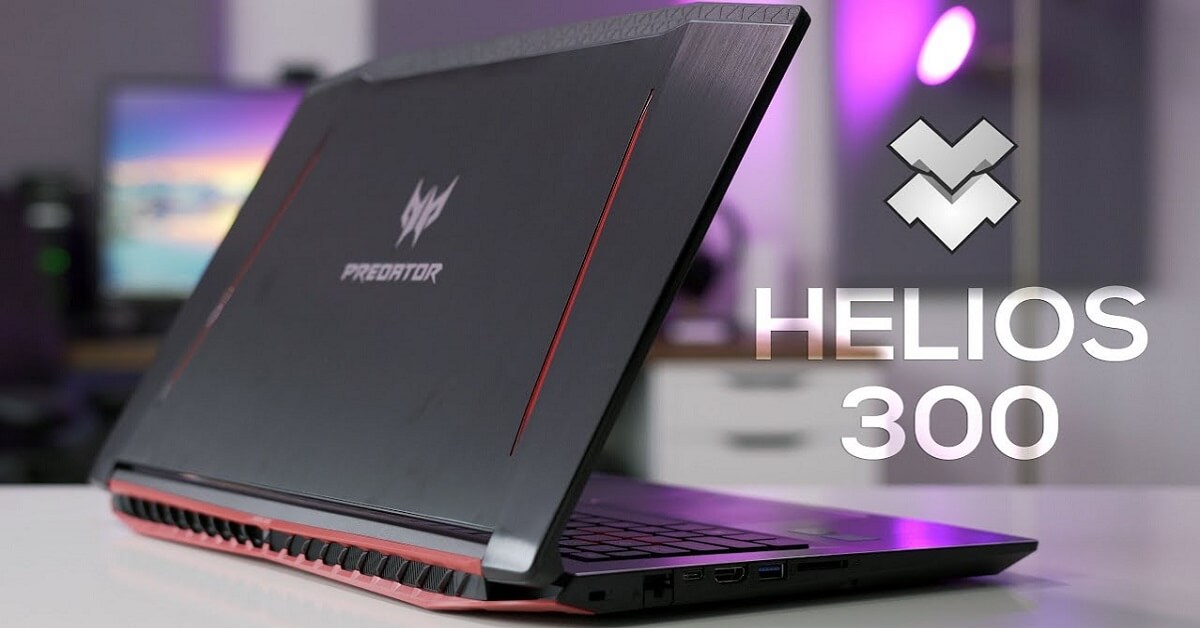 It was a far-fetched idea for many to own a gaming laptop that is bulky, loud, and comes with a heavy price tag. Previously, people used to buy laptops either to upgrade from immobile PCs or just to replace their desktops. ‘Computer’ is counted as one of the greatest inventions of all times. Previously, when computers were launched with a basic user interface, it was seen as an ideal gadget for work. Working on multiple assignments simultaneously has only been made possible due to this device. Not too long ago and even today, computers are the only medium to fulfill the purpose of entertainment for many like playing various video games. Moreover, who would have thought that PC gaming would be taken to such an extent where 4K displays will be available, with substantial configurations? We live in an era where PC gaming is taken to new heights and there’s a separate fanbase for it but the experience you get on a gaming laptop is extraordinary. If you are confused between a PC or a laptop, then ask yourself: wouldn’t you like to own a laptop that doesn’t lag while you play your favorite game? A laptop on which you can play heavy games while lying on your bed, being least concerned about the battery duration? Well, every die-hard gamer would love to have that leverage. Acer is one of the pioneers of the computer market worldwide. They have been producing laptops which are ideal for the gaming purpose and are a top pick among users due to its long-lasting battery, and valuable features and performance. Gaming laptops are designed for gaming on a budget, not for gaming on the go. Realizing the passion for gaming of individuals just like many other companies, Acer also decided to launch ‘Acer Predator Helios 300’ to make it a flawless device for all hardcore gamers. Being a pocket-friendly alternative to other gaming laptops, let’s discuss why you would be sold to purchase ‘Acer Predator Helios 300’ to enjoy the luxury of PC gaming.

Why should you purchase Acer Predator Helios 300?

Let’s narrow down the vital points from design to battery time to understand whether this gaming laptop is the right choice in this Acer Predator Helios 300 review. Moreover, nothing is perfect due to which we’ll be highlighting several weaknesses of this gaming laptop too. 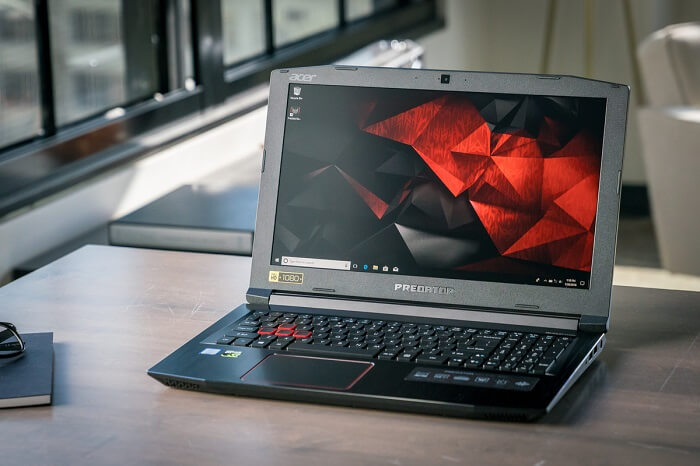 One of the elements which make the machine look attractive is its design and outlook. It doesn’t matter whether you’re purchasing a laptop for work purposes or gaming, but the design should be stylish. The design of Acer Predator Helios 300 is desirable, to say the least. The matte black metal casing with angular planes and lines makes it look that the Predator is all set to convert into a reactive robot. Your gaming laptop is your representation in the field. While you’re about to start your game with bright colors filling your 17-inch screen, Acer Predator Helios 300 is a laptop that motivates you towards victory. A 4-zone RGB customized backlit keyboard using the Predator’s typeface, with see-through concave-shaped WASD keycaps attached to the laptop to give it a sharper and more intense look. The ports for USB 2.0, USB 3.0, USB TYPE-C, and HDMI are fixed on the left panel of the laptop. Meanwhile, the SD Card port, CD slot, and one USB port are on the right side. If Acer Predator Helios 300 is compared to an ideal screen-size laptop which is 15.6 inches so the user might find it difficult to carry. However, to keep the gaming experience real and lively, Acer has developed a bigger screen. 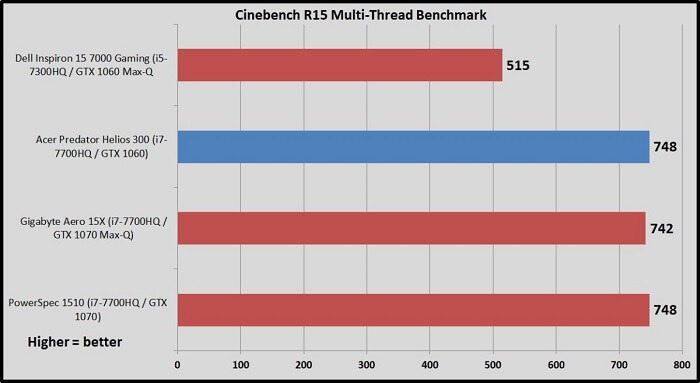 The Acer Predator Helios 300 is armed with Gen Intel Core i7 mobile processor, with Acer’s custom-engineered 4th Gen AeroBlade 3D Technology. The machine is all set to drop you right into the game with everything you’ll be required to defeat your opponent on a fast 240Hz/3ms display. A gaming PC requires good storage, however, there are different variants of Acer Predator Helios 300 available in the market with a maximum of 1 TB. This much storage with being backed by 256 GB’s SSD is efficient enough to run heavy games and to download big files. Moreover, to check how the laptop would perform under stress, a test was conducted among six-core laptops in which a file had to be downloaded of 30GB. Mostly, the results were similar.

An enthusiastic gamer would never keep graphics as a secondary item while playing his/her favorite game. In many cases, GPU becomes more significant than the CPU as it is something that cannot be compromised while gaming. If graphics are not up to the mark, so it would eventually drag the attention of the user towards other things. Graphics play an essential role to keep the gamer engaged. The NVIDIA Geforce GTX 1050 Ti graphic card with 4GB of dedicated memory can keep you engrossed in the game. The smoothness of playing Far Cry New Dawn on this gaming laptop cannot be compared to any other gaming console or competitor. According to statistics on 1080p, while playing under high-quality resolution, Acer Predator Helios 300 runs the game on 88.3 FPS. Who wouldn’t die to buy a laptop with such high efficiency? The quality of graphics doesn’t deteriorate with long hours of gaming.

Not every gamer relies on the built-in sound quality of the laptop as it doesn’t give them the real experience of it. However, even Acer suggested themselves that you could plug in a pair of headphones or speakers in the 360-degree high-end sound system. This way it would enhance your sound experience and you can watch and listen to your favorite movies and music in the best form. The two main features of the Acer Predator Helios 300 sound system are: You can adjust the volumes according to your need and still have a great sound performance. For example, even after modifying the sound, you will be able to track the sound of your opponent approaching you while you play CS:GO. Due to multi-band compression and signal protection, the sound quality is improved. You hear the sounds in the rawest form and in the way they should be.

The battery time can only be measured depending on how many hours you spent while playing games or doing any other activity on it. Acer Predator Helios 300 has an average battery duration of 3 hours 12 minutes with a battery size of 48-watts. It is better than the other powerful gaming laptops who have a battery life of 2.5 hours.

The SE version of the laptop didn’t have a good battery time overall. However, while not being fixed to the wall with a power cord attached for more than three hours of continuous use, Acer Predator Helios 300 is relatively doing a better job than the competitors.

A heating test was conducted on the laptop to discover that after four successful hours of gaming, the peak temperature Acer Predator Helios 300 reached was around 73-degree Celsius. Sometimes, due to long hours the Fahrenheit of the keyboard might rise to 100 which will slightly become uncomfortable. Moreover, when you’re playing heavy games, so the underside of the laptop becomes so hot that it won’t be appropriate for you to place your device on the lap and play. To keep the temperature settled, loud fans are installed in the gaming laptop. They come in use when you start playing your heavy games. On the other hand, the loud noise created by it might become unbearable for you. The fans drive everything else out – music, chats, and even if you’re communicating with anybody. 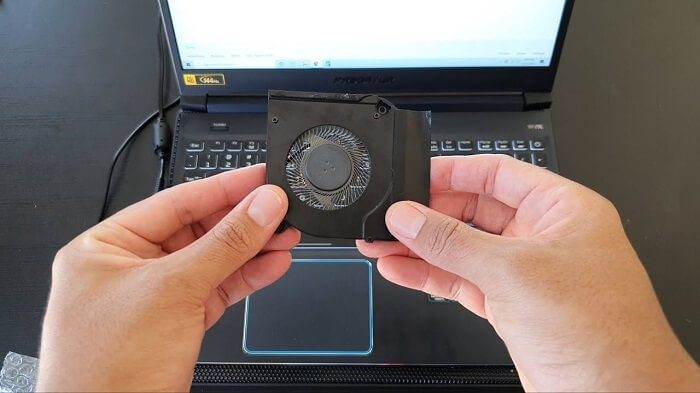 One of the main problems which have been identified by the majority who are using Acer Predator Helios 300 is loud noises created by the fan installed in it. Once you launch the heavy games, the fan starts working and it creates such a blasting sound that there’s a load of disruption even when you’re conversing with the other person. Moreover, another question was raised against the battery timing of the gaming laptop. According to sources battery time is short if compared to other laptops in the same price bracket. Lenovo Legion Y720 is a better option, offering an RGB keyboard, better design, and better port support.

An energetic gamer would never rush into the decision-making process of purchasing his favorite machine. It would take an ample amount of time to research and find out which laptop caters to your needs completely. A gamer must fully analyze some features, including screen size, ram size, battery time, and graphic card. Acer Predator Helios 300 has added new design elements like a metal keyboard deck and a new lid cover. These changes are reflected in the price tag attached to it. Furthermore, the display is an essential part of the laptop and that has been immensely improved by Acer in this laptop. Although, alternate options are available in the same budget. However, Acer Predator Helios 300 is taking the gaming evolution to the upper level.